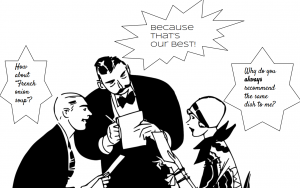 Recommender systems typically are optimized to produce a top-N list reflective of the most-highly recommended items a user has not yet rated. However, there are many reasons to believe that this order may not be the best order to present items to users, either within or across sessions.

END_OF_DOCUMENT_TOKEN_TO_BE_REPLACED

For many years Wikipedia’s editor gender gap has been widely discussed, but its content gender gap has received less attention. This summer we presented our work in developing Wikidata Human Gender Indicators (WHGI) at OpenSym ‘16 which provides statistical insight into the composition of Wikipedia biographies through the use of Wikidata. WHGI has allowed us to research details about the character of the biography gender gap—that it is increasingly looking like the political biases of the real world—and to arm community editing groups with metrics about their work. For instance we are providing the data that allows Wikiproject Women in Red to reflect that, “[…] in November 2014, just over 15% of the English Wikipedia’s biographies were about women. Since then, we have improved the situation slightly, bringing the figure up to 16.52%, as of 9 October 2016. But that means, according to WHGI, only 232,357 of our 1,406,482 biographies are about women.”